So, I went to find you an elephant you won't believe what I saw! Let me start from the beginning. 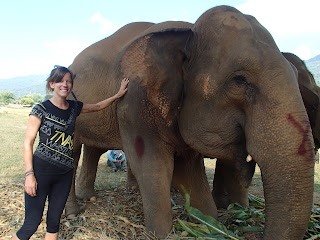 For a full day I went to the Elephant Nature Park, it's about an hour drive outside of Chaing Mai, Thailand (look for a map on the internet to find me!). The organization began in 1995 and today has 71 elephants. The elephants were not treated very well at one point in their life. Some elephants were used for logging where they had to move tress and walk in unsafe places, where they had very hard lives. Other elephants were forced to take tourists for walks in the forest. They would be walking with people on their backs for up to eight hour days. It was ruthless and painful. Also, elephants were rescued from Circuses. I’m not sure if you knew this, but elephants that are in circuses are not very happy. They are suffering because they are chained up for very long periods of time and are often forced to do things they don’t want to through acts of violence. Although it is fun to go to watch them dance around and do tricks, the loud noises are very scary for them and the trainers usually use hurtful methods to make them listen. Finally, elephants have ivory tusks, which are very valuable. This means that people want to hurt elephants to get their tusks, which usually means hunting the elephant. 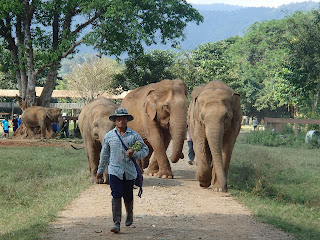 So, the organization that I went to visit pays money (lots of money!) to take these hurting and sad elephants and give them a happy and nice home. During my time at the Elephant Nature Park we got to feed the elephants fruits and leaves, which they love. I also got to spend time giving the Elephants a bath in the river water. I think they enjoyed it as much as they did! The volunteers and staff at The Park are very respectful to the elephants. They only use food as a way to control them. For example, we used bananas to get them into the water (Does Shawna give you chocolate in order to convince you to have a bath!?). The elephants are also free to roam around the park that is full of grass and is a very large area. I even got to pet some elephants. It was a little scary because they are so Big! But they are gentle giants and their wrinkly skin is so soft! 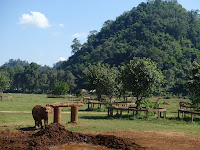 I’ve learned some very interesting things about Elephants. They are very social animals. Many of them have best friends and don’t like to be separated. We met a baby elephant and the mother and, especially the auntie are very close with the baby. Also, elephants can live up to 80 years old! 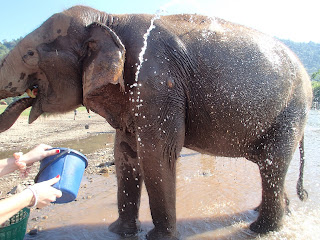 The sad part is that because elephants are used for logging and in circuses and are hunted for their tusks, there are not many elephants in Thailand. The Asian Elephant is officially an endangered species. In fact, there are a mere 30,000 left in the entire world.  In Thailand there is an estimated 3,000-4,000 elephants.  Around half of half of them are domesticated (aren’t living in the wild), the remainder living wild in National Parks Reserves and about 300 are stuck in those circuses and are forced into logging, like I mentioned above. 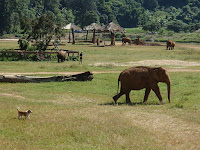 So Willow, this means that I can’t bring you back and elephant, because they are so much happier living with their best friends and family at the Elephant Nature Park. But boy did I take a bunch of pictures and I’ll bring you something as a token of my adventures to see the elephants run free.

I promise that when you’re old enough, as long as it’s okay with your family, we will go volunteer and stay with the elephants for a week. You will have to save money for spending, but I’ll pay for the other stuff. 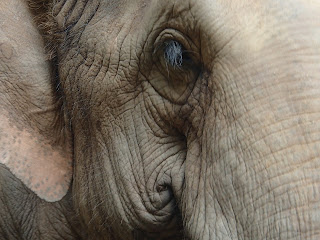 If you want more information on where I volunteer for the day, here is the website: https://www.elephantnaturepark.org/
I am having a great time on my adventure, but I miss you and Heidi so much!

Dr. Seuss — 'I meant what I said and I said what I meant. An elephant's faithful one-hundred percent!'
Posted by Kirstin McNeil at 11:54 PM 1 comment: