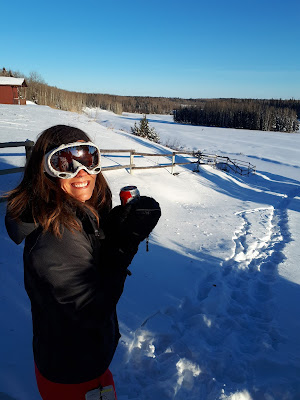 It was a balmy -21C up here in Northern BC and the crisp air was creating a burn deep in my lungs with each inhale which was rapidly increasing with each step. In order to embrace our Canadian lifestyle, and to take the edge off my crazy with some physical activity, I diligently followed each of the Hunter’s footsteps up a steep incline. We’re essentially making homemade stairs by following our same footsteps with each climb. The toughness of the seven minuet hike was made harder with all of our gear, but the eight second ride down was even sweeter. The exhale of breath frosted my hair surrounding my face and I could feel the crunch of my frozen dreds as I unzipped my jacket to cool off as I neared our destination.

On normal days, we had the luxury of T Bars and Chairlifts, but today we got to test our own man power as we climbed with our snowboards swinging lazily behind our arms, and I was anything but cold. The Hunter handed me a Budd and the cold bubbles burned my throat and tasted of victory. The beer was the trade off of having to manually make our way up our own private ski hill as we typically need to rock, paper, scissors who had the luxury of pasengering and who had to sober drive us home from the hill, and typically I was the latter. Today I took extra relish in a sip of fireball and a frosted beer – we were mere moments from our rental so there would only be stumble walking. 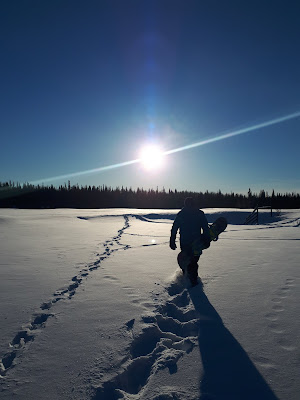 The Hunter’s phone pinged as he received a text message (even as I type the sound of his phone going off makes me think of real-estate) “They’re requesting the subjects to be removed within a week.” He looked at me quizzically as I handed him back the beer “I’m going to counter with a new offer and tell them we want two weeks to get the inspection, insurance and mortgage approved.”


I sat down and strapped myself into my board rather slowly to give myself some time to find my breath. He pointed down the steepest part of our private ski hill and told me to “straight line it”, telling me with such confidence that all the powder will slow me down. My nerves made me giggle as I swung my board in the same direction he pointed at. The sun was starting to set and my view was gorgeous. The pink colours were illuminated by our sea of white snow throughout the farm lands. It’s not the first time that day I thought of how lucky we were to be living in Northern BC.

We’ve been house hunting for quite some time and the only thing we were sure of is that we didn’t really know what we wanted in a house. After viewing several houses, it took us admitting that the house we wanted in five years, which would include a shop with property looked awfully different than the house that would suite us best right now.

And then there we were, in between quick rides down the hill, we found ourselves making an offer on a super-duper fixer-upper, located in town and without a storage shed in the back yard. Reno’s will take place slowly but surely and it will make an excellent rental a year from now. The Hunter and I know this opportunity will not come without its challenges: we both know my painting skills are average at best, and I’ve admitted that I have no idea how to, well, fix up a house, but I’m willing and eager to learn. We’ve sat down and detailed the monthly expenses associated to being home owners, and the benefit of purchasing a house that most people wouldn’t care to move in immediately – except we aren’t most people, as neither of us have standards when it comes to materialistic things, such as a house* – we will still be able to pay for a house and travel the globe, which is such an incredible win.

I take a deep breath and rock my board front to back in order to get it moving and I doesn’t take me long for my board to pick up the pace. My insides clench; I hit the first dip with amazing speed and I let out a wild scream, but the Hunter’s promise stays true and the powder slows me down just before the final hill as I let out a final cry that ends in a giggle as my board comes to a stop.

And I suppose that’s our balance: by the end of that day our offer was accepted. The high from snowboarding in our backyard and the buzz from the alcohol continued through the evening from the adrenalin of becoming home owners. 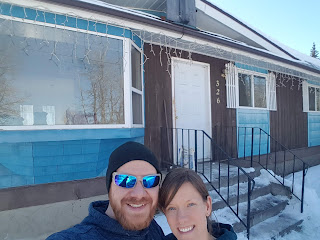 And here we are, we move in later today.

Find someone who is home and an adventure all in one.

*my sister calls me a brand whore when it comes to Lululemon, but I feel like that’s a song for another time. 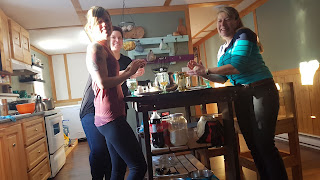 The various sauces were mixing together and I was loving it. The creamy sauce from my green beans were slowly making their way towards the gravy that was sloshed all over my potato dumplings, and the juices coming off of the duck were completing the trio of flavors perfectly. My knife sliced into the dark meat and I closed eyes just as I placed it on my tongue, savoring the rich flavors of something I’ve never tried before.  Dammmmn I slowly crunched through the duck skin and I opened my eyes to see silent tears spill down my four year old niece’s cheek. “What’s wrong?” I asked her. “I just miss my mom” she quietly explained. And I could relate. 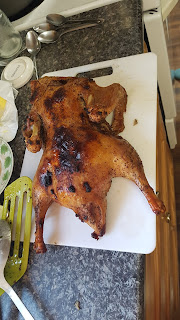 A week before the Hunter and I were booked to head to Smithers, BC for a two days full of snowboarding with Charlie and Charlie’s gal and one night wandering around the town center checking out breweries’ sure to create some good memories. We found out our schedule was double booked on Family Day weekend, my mum forwarded me a flight confirmation and was scheduled to come to town. We would compromise: a night in Smithers and a night with my mum – making a German meal.

Our teacher would be no other then my bold, no-nonsense friend, Julia. She offered to show me how to make a traditional German meal and my mum showed immediate interest. We softened her with good beer and cheap Champagne. Julia learned how to make the traditional meals (schnitzel and potato dumplings) from her father, who I’ve actually met a couple summers ago. He nonchalantly taught her the basics, and when she ran into a hurdle, like how the hell do we cook a whole duck, she would give him a quick call overseas and he would provide some advice. 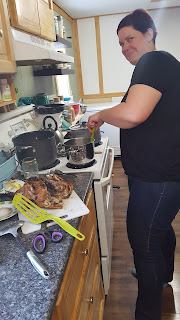 Once whole potatoes boiled, Julia sent my mom and I to work on pealing the hot spuds while sipping our beers, where we shared a cutting board and got caught up on life. Julia is one of our few female supervisors’ at the company I work at. We share a love for champagne and dogs (she has two) and unloading about work. We’ve both had to fight to prove ourselves in the male dominated industry we’re invested in, career wise. I’ve relied heavily on her when it came to turning my job into somewhat of a career as well as relationship hiccups and dog problems. She’s as strong as they come and I am so lucky to have her on my side and in my life. She also makes bitching German pancakes, especially after a girls night of too much spirits. 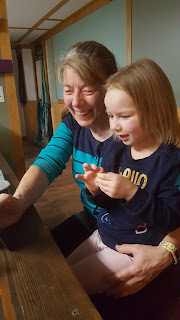 After combining the mashed spuds with starch we formed palmed size balls and placed them into the almost boiling water. Once they floated to the top, they were ready. We mixed together gravy like substance for some boiled beans and took the whole duck out of the oven.

The Friday before my mom was scheduled to fly in, I was sitting down with the Hunter to eat some kind of bean-based-appetizer-turned-into-a-dinner (it’s my specialty) and I quickly admitted to the Hunter that I lost interest in our Smither’s stay-cation; I wanted to spend time at my sister’s house, where we could go to the local ski hill fifteen minutes from her house: I missed my mum. He placed his mitt like hand on my knee and said we should definitely spend the time at my sister’s with my mum.

A girl with German in her genes.

For the love of food and Jeans

Posted by Kirstin McNeil at 5:48 PM No comments: