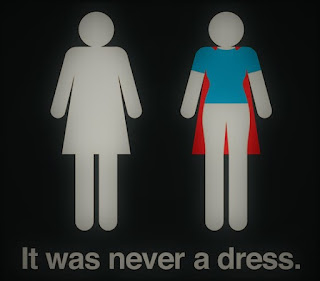 One time it happened in Cuzco, South America at the Loki’s Hostel cerca 2014. This hostel was pretty epic. It had several bunk beds in co-ed dorm style sleeping areas, something like, seven bunks per room. There was a computer area upstairs where anyone could connect to the internet – I actually sent out of my first honest and revealing emails (which turned into the beginning of Calamity Kirstin) from those quarters. The bar/restaurant made fantastic western breakfasts, which we were all missing dearly. The redheaded bartender and I shared a White Russian at some ridiculously breakfast (and not brunch) hour. 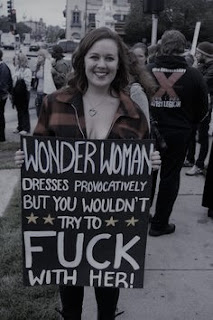 My two favorite gals, Hannah and Lucy, who I volunteered in the Jungle with, traveled Cuzco with me for a few days,  and so the three of us resided at this famous hostel*. As the morning led into the evening and the restaurant transitioned into a bar, we each grabbed a cerveza and I found myself in my first ever game of Flip Cup. You’re in a line up of teammates and your job is to drink the beer in your solo cup as fast as you can, turn it up-side-down with its edge off the table and flip the cup back onto its proper side. The teammate in line cannot do this until you’ve successfully completely this. I was surprisingly good at this game, and lets just be clear, I do not play any type of team sports, nor do I do drinking games well, so this was a first. The competition across from me caught my eye. He was an American and he was giving me sass just as well as he was getting it. Truthfully, I can’t even remember his name (note this), but something tells me Hannah could tell you. I do remember The American had olive skin, was well built and had just enough arrogance to catch my attention.

After my team lost the drinking game, The American and I ended up talking about nothing memorable, but with several cervezas and this newfound YOLO mentality taking hold, we were kissing outside, joking about his age (I didn’t believe how old he was) and I suddenly found myself in his private hostel room – it had two beds, which he shared with his travel mate. I didn’t instigate the sexual advances, but I didn’t say no and I responded to his flirtatious responses promptly. I was hesitant when the clothing started coming off, and I think he knew that. But I didn’t say no. I’ll just say what we all know: I had sex with the The American. 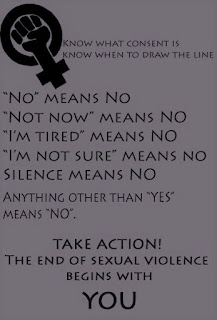 Shortly afterwards, his buddy drunkenly hammered on the door of their shared sleeping quarters, insisting that he be let in. I blindly searched for my tossed items and sheepishly locked eyes with his buddy as he entered and I left.  Him and I made eye contact yet again the following morning, but I never spoke to or saw The American again. I shrugged it off and left the story with Hannah and deep within South America.

My Bubbly Work Friend and I often have deep, tangents and hasty and intense conversations at work, and somehow a piece of this story came up. The definition of consensual sex can be so complicated because the omission of the word No doesn’t transition into a Yes. And we all know, from those horrible stories that none of us wants to be involved in, but we all seem to know a friend (or a be the friend) who is a rape victim, and that even when No is said, clearly and repeatedly, that rape still happens. My Bubbly Work Friend's suggestion was, that instead of teaching girls and boy, women and men, that No means No, what should be taught is what consensual sex is a Yes. Consensual sex should be in the form of a question and not simply be a response to an action. “Do you want to continue?”, “Are you sure you are comfortable with this?”, “Do you want to have sex with me?” are some of countless ways to structure that question. 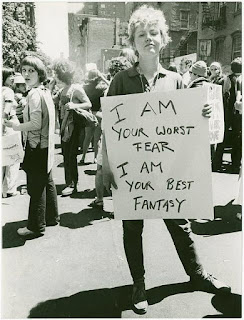 The good news story is that not every girl has rape story that they've painfully endured, survived and have overcome but continue to live with. But I truly believe many, many girls have this story: they were unsure about about having sex with someone, but just sort of, kind of, did it anyway - it was just easier to let happen than say No. I don’t, even with the revelation of that time in Cuzco, at the Loki Hostel, think that I was raped. Thinking back, though, I do believe had The American asked me, as we entered his room and directed me onto his bed, something as simple as “Do we keep going?” I probably would have given it a second though, and truthfully, I believe I would have said no. And perhaps this is something I need to train myself. I too need to take two seconds out of these impulsive, hormone hazy moments and ask my [potential] sexual partner, “Are you comfortable with this?”, as it would provide us both with a moment away from this sex infused air to make a vocalized a consensual decision. Even. At. The. Age. Of. Almost. 30. This hasn't been the only time that just doing it was easier than saying no. 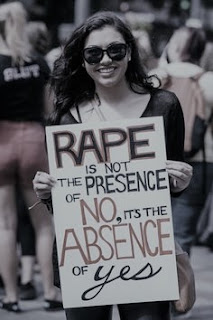 I think that both sexes need to not only acknowledge that No means No, but more importantly, both the Male and Female sex need to ask that question to fully understand if both people involved in this want to have sex. Let me reiterate, the absence of no doesn’t indicate consensual sex.

It was as if she really was speaking for every woman. And that’s profoundly sad. - Lavanya Ramanathan

*this hostel is mentioned in the book, The Lost Girls. Parts of that book resided with me to such an extent that my heart hurt through the duration of many of those chapters.

Posted by Kirstin McNeil at 6:42 PM No comments: